Who Was Saint Agnes?

Saint Agnes is also known as Agnes of Rome, Ines, Ines del Campo, and Ynez.  The name “Agnes” is similar to the Latin word agnus, which means “lamb”.  For this reason depictions of Saint Agnes often include a lamb.  The name actually comes from a Greek word which means “chaste, pure, sacred”.

Agnes is one of the “virgin martyrs” of the church of Rome.  She is one of seven women, in addition to the Blessed Virgin Mary, who are mentioned in the Roman Canon of the Mass (Eucharistic Prayer I). Saints Felicity, Perpetua, Agatha,  Lucy, Cecilia, and Anastasia  are the other six.  Agnes is a patron saint of chastity, gardeners, girls, Girl Scouts, engaged couples and victims of rape.

here are a diversity of accounts of her martyrdom (by fire, or sword) from very early on, and so it is hard to know much with certainty.  The historical record of the specific circumstance/reasons for her martyrdom is also unclear.  Most date her martyrdom to the year 304 under the Emperor Diocletion, but the evidence again is not unanimous.  All sources seem to agree that she was very young, 12-13 years old, when she was martyred, in the late 3rd or early 4th century.  It is the tradition that she was martyred on January 21, and so her feast day is January 21.  It was the custom in the early church to commemorate martyrs on the day of their birth into eternal life.  However, her regular birthday, January 28 has also been commemorated in our church’s history.

One of the traditions associated with Saint Agnes is that on the Feast of Saint Agnes, two lambs who have been raised at the local Trappist Monastery of Tre Fontane, are brought to the Basilica of Saint Agnes Outside the Walls and are blessed.  The lambs are raised into sheep by the Benedictine Sisters of Cecilia in Trastavere (a section of Rome near the Vatican).  The sheep are sheered each year on Holy Thursday.  The wool from these lambs is then woven into material that is used to make around 12 pallia.(Latin singular=pallium, plural=pallia).  The pallia are placed near the tomb of Saint Peter on June 28, the vigil of the Feast of Saints Peter and Paul where they remain overnight.  The pallia are then kept for future use in the “niche of the pallia” in a confessional near the tomb of Saint Peter.

A palium is a collar-like vestment that is the symbol of the office of an archbishop.  It is ornamented with six crosses and is worn over a chasuable.  A palium is presented to an archbishop by the Pope, and is symbolic of his unity with the Pope.  Since the Diocese of  Rome is an archdiocese, the Pope, who is the Bishop of Rome is also an archbishop.  He also wears a pallium .

Saint Agnes is the patroness of our parish.  August Knochelman, who donated much of the land (4.9 acres) of our current parish property wanted the parish to be under the patronage of Saint Philomena.  Bishop Howard however, decided that it would be under the patronage of Saint Agnes.  The reasons for his decision are apparently lost to history.  Our parish actually began as a mission attached to the Cathedral Parish in 1930.  It was established as an independent  parish in 1954.

Sources: Catholic Encyclopedia on line, Wikopedia,  For a contemporary and very thought-provoking reflection on the tradition of the virgin martyrs, please see, “The Virgin Martyrs: Between ‘Point Verge’ and the ‘Usual Spring’” , in The Cloister Walk, by Kathleen Norris, pages 186-205.  Excerpts below:

While the names of many of the young women martyrs of the early church are known to us (Agatha, Agnes, Barbara, Catherine, Cecilia, Dorothy, Lucy, Margaret), the political nature of their martyrdom has been obscured by the passage of time and by church teaching that glorifies only their virginity, which we erroneously conceive of as a passive and merely physical condition.  For them, virginity was anything but passive; it was a state of being, of powerful potential, a point vierge from which they could act in radical resistance to authority.

What we resist seeing in late-twentieth century America–where we are conditioned, relentlessly, by images of girls’ and women’s bodies as available–is the depth of that soul, and how fierce a young girl’s sense of bodily and spiritual integrity can be.  Prepubescent and adolescent girls often express, as Robert Bolt says of St. Thomas More in A Man for All Seasons, “an adamantine sense of self”.  This is not necessarily a sure sense of who they are–in girls, this is still developing–but rather a solid respect for their physical boundaries.  In the early Christian martyrs, this expressed itself as an unshakable faith in Jesus Christ, which enabled them to defy worldly authority.  And, as Andrea Dworkin states in a chapter on virginity in her book Intercourse, each of the virgin martyrs “viewed the integrity of her physical body as synonymous with the purity of her faith, her purpose, her self-determination, her honor.” 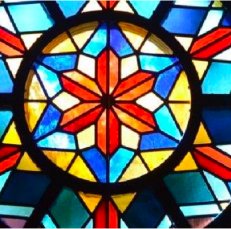